Woman and guide in Nepal

Woman and guide in Nepal

From Everest Base Camp to Annapurna Sanctuary, on the trails of the Comunity Trek in Kopra or in the temples of Upper Mustang, in a previous publication we introduced Anita Rajkarnikar, French and English speaking guide at Base Camp Trek which surveys the Nepalese Himalayas all year round. She had explained to us her desire to become a guide and her daily life, combining family life and her work as a trekking guide in Nepal. Today we are going to tell you about other women who, like Anita, have decided to show that being a trekking guide is also a woman's job, despite the criticism of relatives and / or the reluctance of some men. It is with pleasure that we highlight them in this article.

It is true that the first image that comes to mind when we talk about the Sherpas, the porters, and the guides who frame the trek 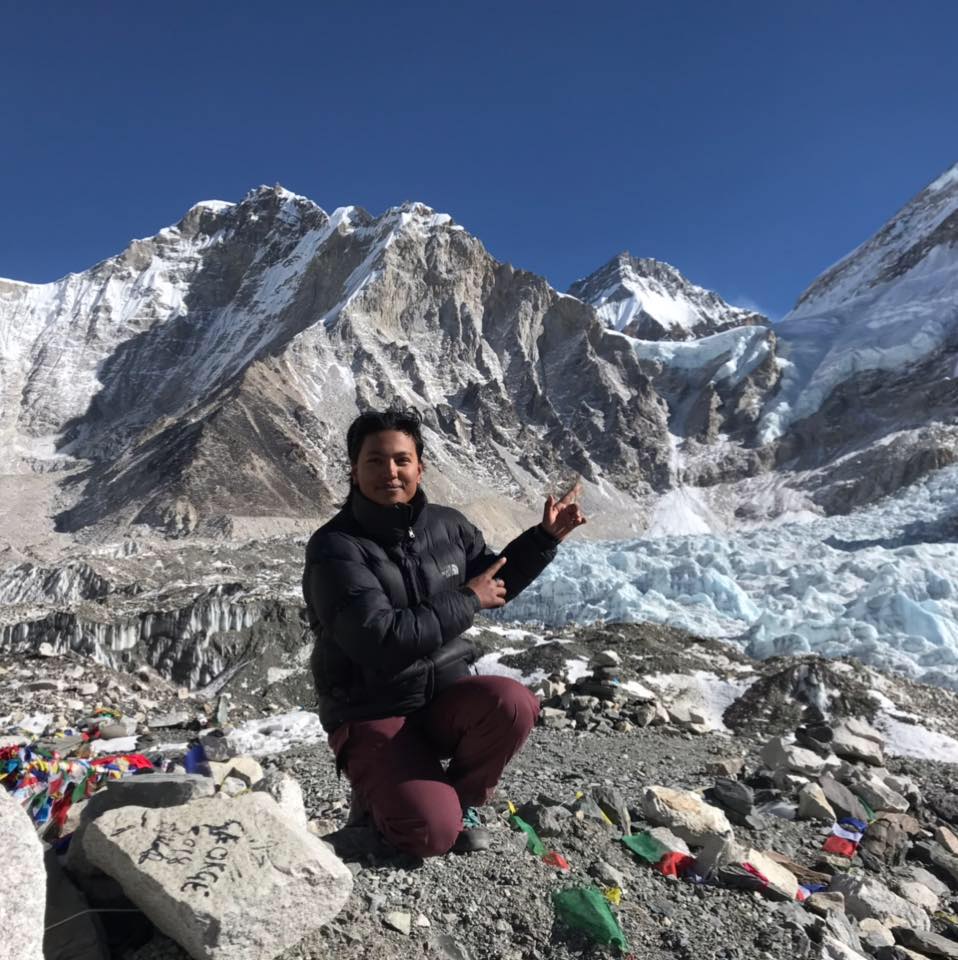 in the Annapurna Massif or on the Everest trails, we think of men. And yet, today, many women have become involved in the mountain trades with courage and pride.

The association "Empowering Women of Nepal" was created in 1999 by three sisters of Nepal: Dicky, Nicky and Lucky Chhetri and its primary goal is to improve the living conditions of Nepalese women. In close collaboration with their trek agency, which financially supports projects, this association trains women in tourism-related activities such as the environment, communication, group management and culture. These 3 sisters have opened a trekking agency exclusively for women, since they realized very quickly that women sometimes had problems with some male guides with inappropriate or bad behavior towards them. After receiving several testimonials in this sense, they decided to embark on the adventure.

The three sisters have been immersed in tourism since a very young age since their parents were managers of a Guesthouse. Lucky later went on to become a guide and realized that it was very difficult to get a job in this world that seemed to be only for men. This is where the trigger took place and all three decided to open a women's trekking agency from Pokhara, which specializes in treks in the Annapurna Massif and Mardi Himal.

Through their association, they offer young Nepali women access to several training courses related to the profession of guide: training in first aid and actions that save in the sometimes isolated conditions of the mountain, formations to the evil of frequent altitude on the high treks of Mustang, Everest or Manaslu: And of course they learn english, in order to understand and interact with their clients. They also receive an introduction to hygiene, sustainable tourism and environmental awareness. These courses are entirely supported by the association and future guides do not need to pay them (training costs around 500 euros). Thanks to these trainings and the involvement of the sisters who travel through Nepal to publicize their agency, the team already has 80 women and about 500 women have been trained since the creation of the association.

Some women travelers find it very assuring to be supervised only by women traveling alone or between friends. The fact of offering treks accompanied by women (guides, assistants, cooks, carriers) for women would be an additional reason to undertake a trek to Manaslu or Langtang and facilitate communication and would allow to develop a shared and cross-cultural complicity. 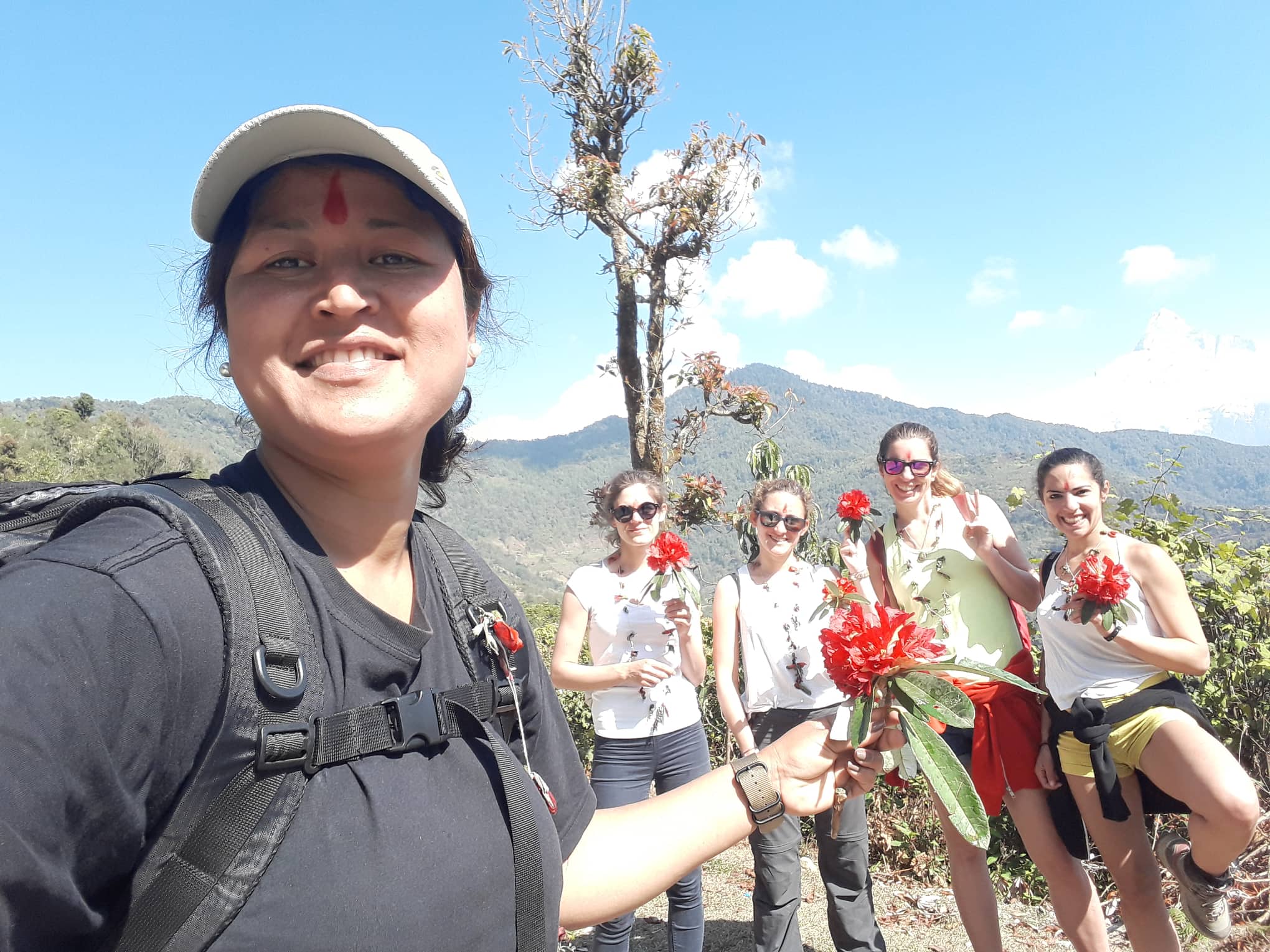 The 3 sisters also offer the nights in their Guesthouse during the trek. There is no intermediary during their trip and everything is organized with them. Several articles show that the women guides who were employed by the 3 sisters and who supervise groups are very happy and finally feel fulfilled because they have had the opportunity to access training and to perform a profession and this despite the judgment of some. Know that it is possible today to make a trip only between women. Following the "Three Sisters", several Nepalese agencies organize trips and treks between women, at Mustang, Dolpo, Annapurnas or Everest. This is notably the case of Base Camp Trek, a French-speaking agency in Kathmandu, which today employs several female guides and assistants, such as Sun Maya and Anita, and both are from the Kathmandu valley.

On the other hand, Yangkyi comes from the more than modest family in the Everest region. As often the case in poor families in Nepal, the education of girls, who will definitively leave their families at the time of marriage, is often sacrificed for the benefit of the boys who will support the whole family. Due to lack of means, Yangkyi left school when she was very young and began to work. She meets a French native of Annecy who is going to overbalance her life. He takes her under his wing and allows him to return to school. Realizing his high potential he planned to send her to continue her studies in the United States, something she refuses. In 2007 she went to Annecy where she learned French. Back in Kathmandu she follows several formations and becomes very quickly guide. She holds this position in the same agency for 5 years. She realizes that the situation is difficult as a woman to be able to access the same conditions and the same respect as a male guide but continues and is necessary. Having successfully climbed Everest last year with two other women, she wished to send the following message to all the young Nepali girls who do not dare to assert themselves in the face of the reluctance of the families: everything is possible for them. women and men, and it is important to stay in Canada and flourish rather than leave She is very proud of having achieved this ascent, she is not going to stop there since she is already planning to offer trainings to other women, to give lectures to encourage Nepalese women to stay in Nepal and to realize themselves in their country.

Another great story is that of Dawa Yangzum Sherpa who was the first Nepalese woman to obtain certification from the International Union of Mountain Guides. Like others, she had to face a lot of criticism and was often told that it was not a job for a woman and that she would not find her place in this male environment. Before her, more than 50 Nepali guides who had already obtained this certification were only men! She began to guide at the age of 17 in the Massif Everest region and then turned to mountaineering: she had many ascents to her credit. In 2012, National Geographic Society contacted her for an expedition to Everest. Then In 2014, she participated in the first expedition of Nepalese women to K2. While continuing her career as a trekking and mountaineering guide, she hopes to inspire other women through her courage and achievements.